PENSational: How the 2015-16 Pittsburgh Penguins Captivated an Entire City on Their Way to Winning the Stanley Cup (English Edition) por Jason Zemcik 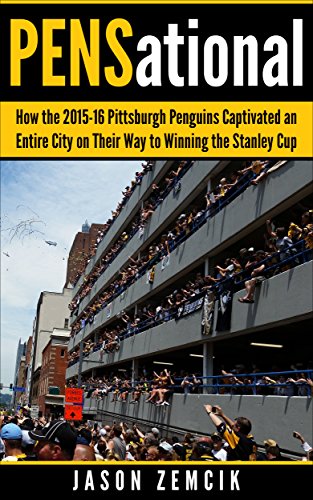 Jason Zemcik con PENSational: How the 2015-16 Pittsburgh Penguins Captivated an Entire City on Their Way to Winning the Stanley Cup (English Edition)

The 2015-16 Pittsburgh Penguins completed one of the most improbable season turnarounds in recent sports history on their way to winning the franchise’s fourth Stanley Cup. Stuck in the middle of the pack in the NHL’s Eastern Conference for the first half of the season and even falling out of playoff position at times, the Penguins showed resilience, resolve, and ultimately revitalization as they caught fire in the season’s final month and carried that momentum through their remarkable playoff run.

PENSational tells the story of what this Penguins team meant to the fans of Pittsburgh. From the disappointing early months of the season to the frenzy that overcame the entire city when it became real that a championship was indeed within the Penguins’ reach; from the setbacks dealt by injuries to the uncertainty of a mid-season coaching change and the sadness over the sudden retirement of one of their most beloved and inspirational players due to health issues, the 2015-16 Penguins’ season was a roller coaster ride of emotions that all culminated on a perfect June day when the team paraded the most recognizable trophy in sports, the Stanley Cup, through the city streets in front of 400,000 impassioned fans.

The 2015-16 Pittsburgh penguins didn’t just win a championship; they won over an entire city with their style of play and their relationship to the fans that they represented.