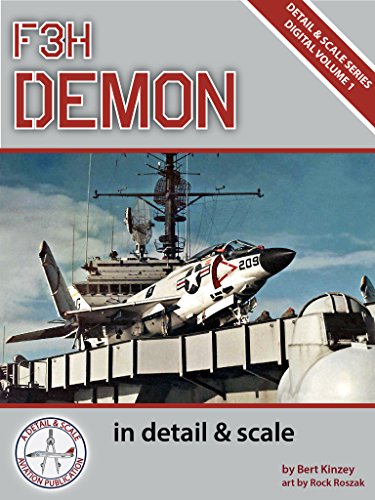 For more than thirty-five years, the Detail & Scale Series of aviation publications was considered one of the best references on military aircraft available. Focusing on the physical details of the aircraft, such as cockpits, engines, avionics and electronics, armament, landing gear, and more, each of the sixty-nine titles in the series provided the most detailed look at a wide variety of aircraft dating from World War II to the present.

The “F3H Demon in Detail & Scale” continues the well-established and respected Detail & Scale format as the first digital title in this series. It covers McDonnell’s Demon, a jet fighter flown by the U. S. Navy in the 1950s and 1960s, in extensive detail. There are more than 340 photographs, and of these, more than 140 are photographs of details covering the Demon inside and out. All of the detail photos are in color, and almost all were taken specifically for this publication.

The 340+ photographs are supplemented with more than 50 art profiles and illustrations, all of which were created just for this new title in the Detail & Scale Series. Every squadron to fly the Demon is covered along with information about their deployments aboard aircraft carriers of the Atlantic and Pacific Fleets.

As with all books in the Detail & Scale Series, a special section is provided for scale modelers that reviews the model kits available of the Demon.